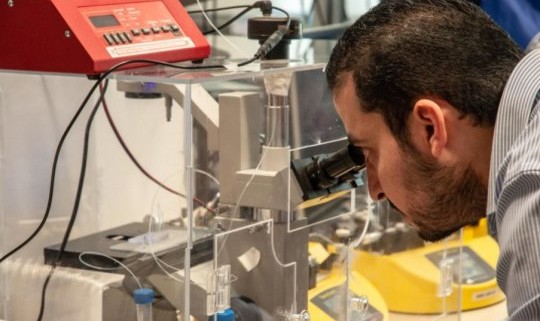 A simple injection that can help regrow damaged tissue has long been the dream of physicians and patients alike. A new study from researchers at UBC Okanagan moves that dream closer to reality with a device that makes encapsulating cells much faster, cheaper and more effective.

“The idea of injecting different kinds of tissue cells is not a new one,” says Keekyoung Kim, assistant professor of engineering at UBC Okanagan and study co-author. “It’s an enticing concept because by introducing cells into damaged tissue, we can supercharge the body’s own processes to regrow and repair an injury.”

Kim says everything from broken bones to torn ligaments could benefit from this kind of approach and suggests even whole organs could be repaired as the technology improves.

The problem, he says, is that cells on their own are delicate and tend not to survive when injected directly into the body.

“It turns out that to ensure cell survival, they need to be encased in a coating that protects them from physical damage and from the body’s own immune system,” says Mohamed Gamal, a doctoral student in biomedical engineering and study lead author. “But it has been extremely difficult to do that kind of cell encapsulation, which has until now been done in a very costly, time consuming and wasteful process.”

Kim and Gamal have solved that problem by developing an automated encapsulation device that encases many cells in a microgel using a specialized blue laser and purifies them to produce a clean useable sample in just a few minutes. The advantage of their system is that over 85 percent of the cells survive and the process can be easily scaled up.

In addition to developing a system that’s quick and efficient, Gamal says the equipment is made up of readily available and inexpensive components.

“Any lab doing this kind of work could set up a similar system anywhere from a few hundred to a couple of thousand dollars, which is pretty affordable for lab equipment,” says Gamal.

The team is already looking at the next step, which will be to embed different kinds of stem cells — cells that haven’t yet differentiated into specific tissue types — into the microgels alongside specialized proteins or hormones called growth factors. The idea would be to help the stem cells transform into the appropriate tissue type once they’re injected.

“I’m really excited to see where this technology goes next and what our encapsulated stem cells are capable of.”

The study was published in the journal Lab on a Chip with funding from the Natural Sciences and Engineering Research Council of Canada and the Canadian Foundation for Innovation.

The Top Five Recommendations for Improving the Patient Experience

This site uses cookies. By continuing to browse the site, you are agreeing to our use of cookies.

We may request cookies to be set on your device. We use cookies to let us know when you visit our websites, how you interact with us, to enrich your user experience, and to customize your relationship with our website.

Click on the different category headings to find out more. You can also change some of your preferences. Note that blocking some types of cookies may impact your experience on our websites and the services we are able to offer.

These cookies are strictly necessary to provide you with services available through our website and to use some of its features.

Because these cookies are strictly necessary to deliver the website, refuseing them will have impact how our site functions. You always can block or delete cookies by changing your browser settings and force blocking all cookies on this website. But this will always prompt you to accept/refuse cookies when revisiting our site.

We fully respect if you want to refuse cookies but to avoid asking you again and again kindly allow us to store a cookie for that. You are free to opt out any time or opt in for other cookies to get a better experience. If you refuse cookies we will remove all set cookies in our domain.

We provide you with a list of stored cookies on your computer in our domain so you can check what we stored. Due to security reasons we are not able to show or modify cookies from other domains. You can check these in your browser security settings.

These cookies collect information that is used either in aggregate form to help us understand how our website is being used or how effective our marketing campaigns are, or to help us customize our website and application for you in order to enhance your experience.

If you do not want that we track your visit to our site you can disable tracking in your browser here:

We also use different external services like Google Webfonts, Google Maps, and external Video providers. Since these providers may collect personal data like your IP address we allow you to block them here. Please be aware that this might heavily reduce the functionality and appearance of our site. Changes will take effect once you reload the page.

The following cookies are also needed - You can choose if you want to allow them: